Many thanks to those who visited
Nature, Rocks, Flowers, Water and Clay
during ASIA WEEK NEW YORK
March 9–18, 2017 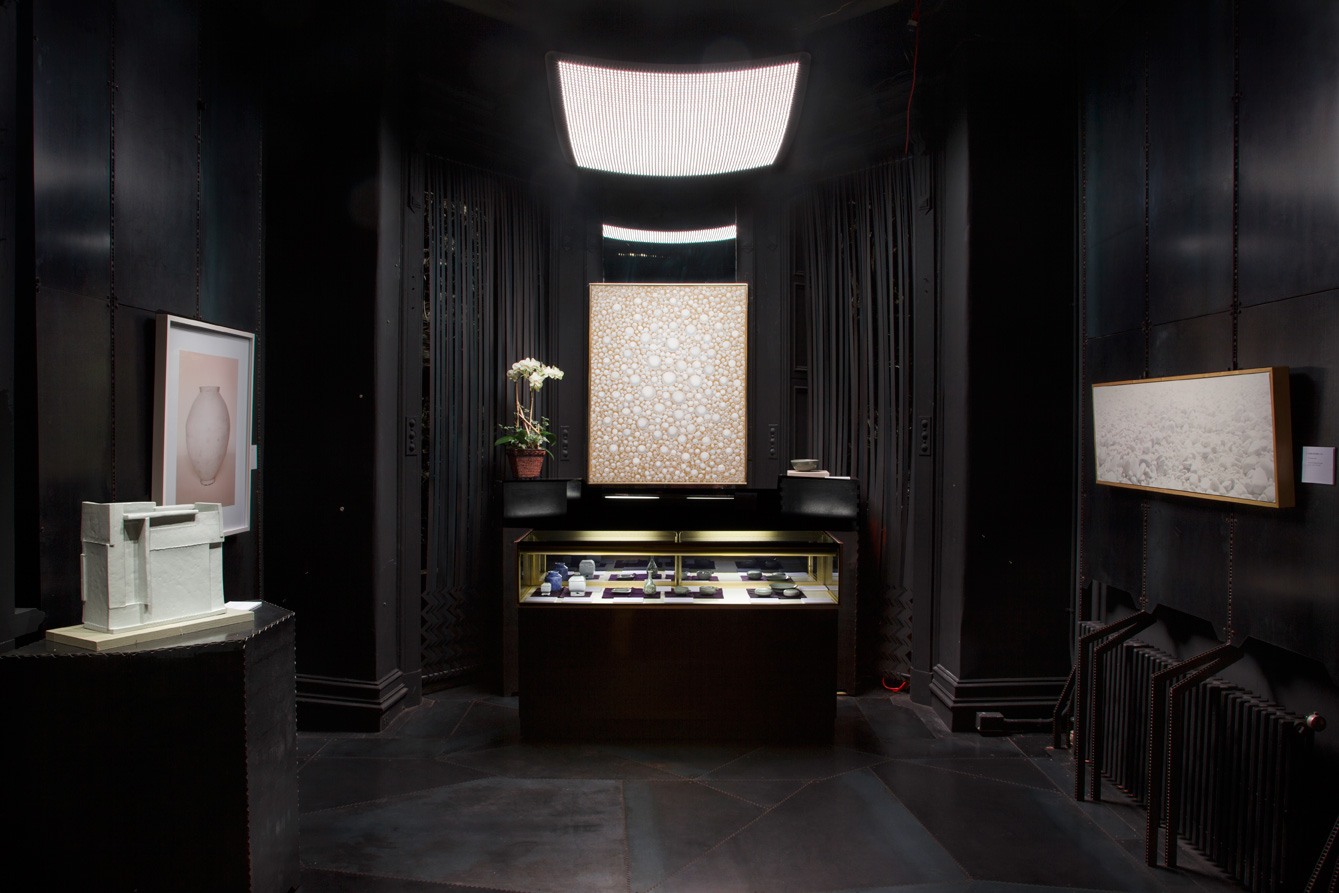 Read the essay from the exhibition catalogue below.

For almost 1,000 years, Korean artists and makers have taken inspiration from the natural elements to create ceramics and pictorial images. Celadons of the Goryeo dynasty (918-1392) and porcelains of the Joseon dynasty (1392-1910) were made by anonymous craftsmen, who inherited the low status of their profession from their ancestors. These nameless artisans manipulated the rocks and plants of their native land to build the clay forms covered in shiny glazes that we know today as celadons and porcelains. Their vessels were supplied to powerful patrons and customers at court and across the country. Very few of these traditional Korean ceramics ever made the journey outside Korea in pre-modern times.

Korea’s distinctive green glazed ceramics with inlaid decoration, known as sanggam, were made first in the early 12th century. Nature’s bounty also provided numerous themes for the potters to use when applying patterns to their wares. The peony, lotus, water plants and ducks depicted on boxes, bowls and bottles are typical of the unaffected beauty of Goryeo celadon. From around 1420 onwards, a different ceramic product, white porcelain, gradually displaced green-glazed stoneware as Korea’s favourite. Two little porcelain boxes with covers, made in kilns near Seoul around 1800, demonstrate Korean people’s deep attachment to white porcelain, lasting over 500 years.

The five living artists showing work in Nature, Rocks, Flowers, Water and Clay live in a very different world. Across Asia, Europe and America, all have made an impact in the international arena, drawing the world’s attention to Korea’s traditions and aesthetics. Tschangyeul Kim, best known for his hyper-realistic water- drop paintings, has worked in France and Korea for over three decades, attracting collectors and curators by the meditative, repetitive calm of his work. In 2016, Kim was honoured with a museum dedicated to his work. His extraordinary life has spanned a traditional Confucian upbringing, the trauma of the Korean war, studies in New York, and many years of living and painting in France.

Moving from water to rocks, we come to the eclectic practice of Tchah Sup Kim. Born in Japan, Kim moved to Korea as a child. Early in his career, he rose to prominence when he represented Korea at the Paris Biennale of 1966, soon after graduating from university. A preoccupation with the relationship between nature and science has consistently informed his painting. Korea’s mountains and streams, where water and rocks meet and shape each other’s paths, recur frequently in his work.

Trained in France, Taik-ho Cho has painted subjects such as mountains, flowers and seascapes. Intense and reverent, his works draw the viewer’s gaze across the canvas, using light and colour to recall nature’s vital spark. His paintings have drawn comparison with the Impressionists, because like Monet, Seurat and Cezanne, he deploys both intellect and emotion to express his connection to the shapes and scenes he portrays.

Bohnchang Koo’s poignant photography has been widely exhibited outside and inside Korea, and his depictions of Joseon dynasty white porcelains evoke powerful responses from viewers. Seen through the photographer’s lens, the three dimensions of the jars take on new life, just as the actual vessels, removed from their primary environment, gain layers of meaning and history in their new environments. An active publisher and exhibition organiser, Koo has a gift for revealing the gentle softness and lightness that characterises architectural space in traditional Korean buildings. Koo’s vessel series has considerable emotional resonance, reflecting the artist’s travels outside Korea. He has photographed white porcelain of the Joseon period that has been transported to foreign lands because foreigners feel a strong attraction to its plain, unaffected beauty.

For Geejo Lee, the fifth artist in the group, enquiries into the identity of Joseon white porcelain have led to a remarkable practice which consciously applies modern aesthetic theory to objects fashioned of white porcelain clay. Lee’s ceramic forms engage with space and structure, and are also concerned with surface and texture. The artist finds a meditative, ritualistic pleasure in the repeated slapping of clay slabs with his bare hands, and has said that ‘artistic emotion and bodily movements are the base of artistic expression and the source of aesthetics’.

For all the artists, emotion, identity and expression derive from the physical, natural world of Korea, formed of rocks, flowers, water and clay.